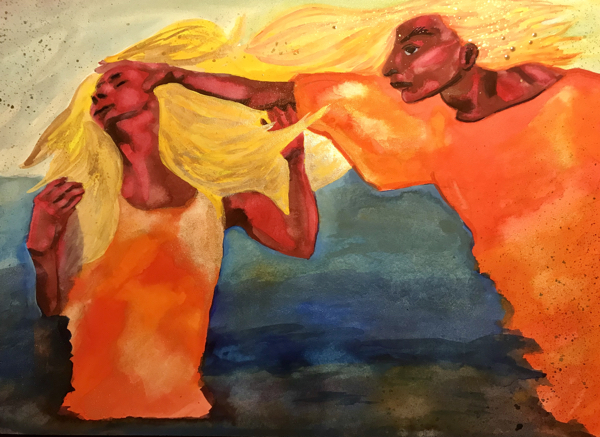 Just as Paul is being blown hither and yon as he converts, learns, escapes, and hides, Peter, too, seems more than willing to go where he’s sent and accept whatever requests come to him. First he drifts down to Lydda, and then he follows a summons to Joppa, raises Tabitha from the dead, and then just stays there with Simon the Tanner until the next adventure comes along. He seems to have no agenda, no to-do list, no plan beyond following the prompting of the Holy Spirit. His actions are free in a way that few of ours are.

A few years ago I read Sam Wells’ book, Improvisation: The Drama of Christian Ethics. In it, Wells talks about the Acts of the Apostles, and the “improvisation at the beginnings of the church-the constant need to find ways of staying faithful in constantly changing circumstances and environments. Indeed,” Wells says, “Jeremy Begbie describes the whole of the Acts of the Apostles as ‘a stream of new, unpredictable, improvisations.’” I was intrigued by Wells’ book, and wanted to experience improvisation first hand, so I signed up for Second City weeklong intensive in Chicago, and from there took classes in Columbus, where I live. My improv career, such as it was, is now over, but I’m deeply grateful for the time I spent learning and performing, because I feel that it made me a better Christian, more able to imitate the wild improvisations of Peter and Paul.

One of the things that improv teaches is to always be open to new discoveries in a scene. We often think we know what to expect, and so we close down our senses and curiosity and simply fail to notice occurrences that don’t fit within the scripts of our lives. Discovery is about doing the opposite, opening your eyes and ears to everything happening around you and picking up all of the delightful, unscripted bits of human behavior so that you can respond to them joyfully. I learned this early on when a classmate misspoke and invented a word with the slip of the tongue. My instinct was to pass right over this, but my instructor stopped the scene and suggested that I use it, that I and my scene partner agree to live in a world where that word was used and made sense to everybody. Within minutes we were all laughing, caught up in the joy of discovery.

Thanks to this training I’m open to all sorts of things in my everyday life that I never really was before. This has been of great value within my church community. More than that, its filled my relationship with God with humor, delight, excitement, and silliness. In other words, its opened me up to joy.

I imagine that Peter, as he healed Aeneas and resurrected Tabitha, was full of joy. Yes, he was praying in Tabitha’s room, beside her dead body, and accompanied by the weeping of widows. Yet he must have been filled by the joy of the resurrection, his senses filled with the scents and sounds of the garden, as he reached out to raise her from the dead. He was open to the possibility of miracle and grace, and the Holy Spirit was thickening the air currents around him as he discovered that the practice of resurrection, in all its wonder, was part of his apostleship.