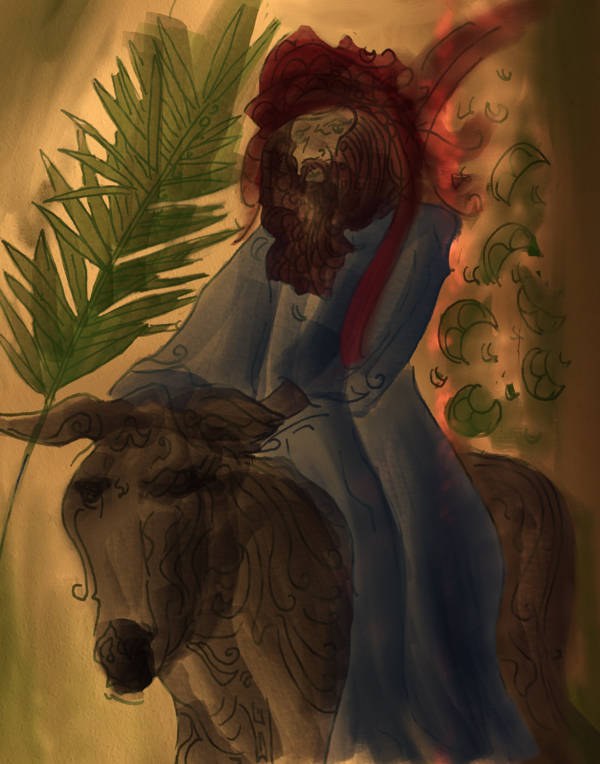 There’s a very real way in which Jesus’ actions as he enters Jerusalem are political theater.  He stages an entrance that is very similar to a Roman triumph, when a returning general would parade his troops through the streets and show off his captured enemies.  And the people of Jerusalem were used to these triumphs, having been conquered many times. The Macedonian king Alexander the Great had entered Jerusalem in triumph in 332 BCE.  The Roman general Pompey entered Jerusalem in 63 BCE. And on the same day that Jesus entered Jerusalem, Pilate brought up troops from Caesarea Maritima and processed them through the city.  Jesus’ procession was meant as a kind of protest to this display of Roman Imperial power. Pilate processed as a prince of war. Jesus processed as a prince of peace.

His actions in the temple were also political theater.  The temple was the place where people came to be reconciled to God, which they did by paying for the priests to sacrifice live animals on their behalf.  In this way, the temple controlled access to God. But the temple also collected taxes for the Romans, and stored the records of debt. So the temple was both a bank and a place of worship, and it was presided over by a High Priest who was in the Romans’ pocket.  So Jesus’ driving out of the money changers was an act of protest against this whole system. He didn’t think that we need anything to mediate between us and God, and he protested the system of economic and political domination that the temple had come to represent.

But what, if anything, does political theater have to do with the spiritual life?  It’s often the domain of activists, and while some of them are deeply spiritual people, some are not.  Some are more guided by anger than love. Yet Jesus makes clear that following him includes following him to Jerusalem, a place where oppression and political evil cannot be denied, a place where a once beautiful idealism has rotted.  How can a contemplative, who is driven by a deep affinity with God’s love for the world, encounter and protest oppression without going astray?

Gerald May, in his book The Dark Night of the Soul, which is primarily about Teresa of Avila and John of the Cross, has some useful thoughts about this:

Instead of looking into social and political dynamics specifically, Teresa and John keep returning to the experience of the individual soul in relationship to God.  I have found this to be true of other contemplative writers as well. It is not that they are unconcerned with social liberation and justice, but that they are convinced such transformation will happen only through the changing of individual hearts.  The Dalai Lama put it starkly in 1991: “Although attempting to bring about world peace through the internal transformation of individuals is difficult, it is the only way.”

Jesus’ theatrics is not meant to bring the temple system down – he knows that it will fall under its own weight fairly soon.  His actions are meant to bring into question the very suppositions that the temple system is based on. Do we need to purchase God’s forgiveness through sacrifice?  Do we need our relationship with God to be mediated by a religious or political system? When we’re faced with a controlling and dominating person or group, is our only recourse to control and dominate in return?  His actions confront the many assumptions that get in the way of transformation. As long as violence, dominance, and oppression go unquestioned, the world can’t be transformed. But more than that, as long we refuse to question those forces in our spiritual lives, we can’t be transformed, and the transformation of the world depends on our internal work.